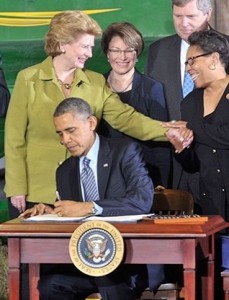 Vote Hemp, the United States’ leading hemp advocacy organization is pleased to announce that President Obama has signed the Farm Bill, which essentially is amending the legalization of hemp production for research purposes. State Agriculture departments, colleges and Universities are now permitted to grow hemp for academic and agricultural research. This is fantastic news for the hemp industry.

The amendment was originally introduced by representatives Jared Polis (D-CO), Thomas Massie (R-KY) and Earl Blumenauer (D-OR), and applies exclusively to states in which industrial hemp farming is already legal under law. So far in the 2014 legislative season, the legalisation has been introduced or carried on in the states of Arizona, Hawaii, Indiana, Nebraska, Mississippi, New York, New Jersey, South Carolina, Oklahoma, Tennessee, Washington, Wisconsin and West Virginia. Not only this, but 32 states have introduced pro-hemp legislation and 20 have passed pro-hemp legislation. Clearly, these impressive figures show that the actual legalisation of industrial hemp is supported by many, and the figures are very likely to just keep growing.

Senator Mitch McConnell worked hard to strengthen the hemp research amendment at the committee process of the Farm Bill conference, as did ‘Vote Hemp’ President, Eric Steenstra. He said, “With the U.S. hemp industry estimated at over $500 million in annual retail sales and growing, a change in federal law to allow colleges and universities to grow hemp for research purposes means that we will finally begin to regain the knowledge that has been lost over the last fifty years.” He also stressed that it is the first time in American history that industrial hemp has been officially differentiated from the drug varieties of Cannabis. Therefore, the market opportunities for hemp are highly promising. “This is not just a boon to U.S. farmers, but it is a boon to U.S. manufacturing industries, too.” Eric says.

Not only has the Farm Bill been signed, but two more industrial hemp bills have been introduced. The “Industrial Hemp Farming Act of 2013” was introduced in the U.S. House in early February of 2013, and its companion bill, S.359 was introduced in the U.S. Senate shortly after. The bills define industrial hemp and separate it from the definition of ‘marihuana’ in the Controlled Substances Act (CSA). Also, they give states the authority to regulate the growing and processing of the crop. If these bills are passed like the Farm Bill, they would take away federal restrictions on the cultivation of industrial hemp. With the way things are going after the signing of the Farm Bill, the passing of these two bills does not seem unlikely at all.

President Obama’s authorization and the generally positive reaction from a variety of states towards industrial hemp legalization signifies the progress of hemp in the United States. More and more people are becoming aware of the potential benefits from the legalization, particularly the endless amount of market opportunities for hemp. Watch this space.