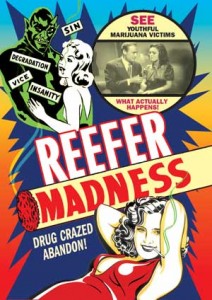 William Hearst waged a war on marijuana to take away the competition using any means necessary to stabilize his livelihood. Unfortunately for the American people he had political pull and he wasn’t afraid to benefit by using his strong influence. Back in the roaring twenties, as we came into the technological age, our beliefs and things we understood, were antiquated at best.

The black cat was still to be feared. Polio was a killer and so was the common cold. People still believed that bleeding a person was the only way to save them. And in among all this geriatric learning we did, one evil was traded for another.

Hearst joined the wealthy DuPont family who held many exclusive patents on chemicals used in manufacturing paints, plastics and paper that could become worthless if hemp products became widely available.  Hearst was fearful of the affects those products would have on his paper mills and other businesses. So they formulated a plan to prevent the cultivation or importation of hemp products into the United States as many men do when they’re threatened.

With his friends of fancy and plans being laid, the Volstead Act was worked on until he had it abolished and replaced with the war on drugs. This circle of influence reached to the highest of our politicians. Whether or not they knew they were being used, is entirely up to history. Between 1930 and 1937, Hearst and the DuPont Empires, had convinced several states to outlaw marijuana possession and by 1937 “The Anslinger Act” – formally known as the “Marihuana Tax Act of 1937” – was passed by Congress. It imposed a prohibitive tax on the cultivation and importation of hemp and hemp products and criminalized marijuana use at both the state and federal levels.

He began the war with his newspaper and surreptitiously began attacking the DuPont’s and their empire. All the while, being very wily and fox like. His articles were scathing, and bringing forth the evils drug lords and pot smokers could do. He was terrifying the quiet house wife, and preaching to all those that would listen.

The newspapers of the time were known as the Muckraker’s for a reason and William Hearst and the influence he derived, was no exception. He had no problem with assisting in the continuation of fraud, fear and keeping the balance on his side of the sidewalk.

It was so devoutly done that in 1937 Marijuana was outlawed and alcohol became legal to have again. The Speak Easys died away and Hearst held onto his empire.

All that legal wrangling done over eighty years ago and we still have issues with the marijuana trade. It’s also a part of the high risk list for merchant accounts. Right along with airline tickets, musical tickets and simple things that we all rely on daily. Who would know, that William Hearst’s ramblings in his newspaper would still have a handhold on us almost a century later.

Although we know that people that use the marijuana respond differently to it. Some have no effects and others have grand ramifications. The point is, this little weed and other high risk merchant accounts have difficulties reaching a decision because of their fly by night methods. Because one man deemed this plant something of evil, and beyond reason, several other industries followed.

So, when searching for something, the lesson is, don’t discriminate until you have the entire story. You have no way of knowing, how it will affect everyone.