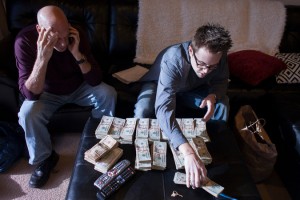 The recreational marijuana businesses may not be unbanked like they say they are. There a dozen stores supplying their customers alternative ways to make payments as long as they have a bank account.

Recreational marijuana businesses are allowing their customers to pay by credit card or ATM. Customers say they were very surprised and pleased when they found out they did not have to use cash to pay for recreational cannabis. They enjoy the freedom of being able to walk up to the counter and pay just like you would in a non-marijuana store with your plastic. Some recreational marijuana businesses were set up to even except Visa and MasterCard. The businesses say this was to ensure that no illegal transactions were entered to their systems.

But Visa has put the onus on merchant banks to decide the definition of illegal. And Visa stands strong to the law and they do not want their network being used for unlawful purposes.  MasterCard and Visa backed away last year when there were federal raids in California and Colorado for suspected medical marijuana businesses, disallowing the cards for any purchases since September.

The Federal Government considers the sale of marijuana illegal but they will not challenge the state laws that have legalized and regulated marijuana sales. A statement from the Federal Government reads; “Given the federal government’s position and recognizing this is an evolving legal matter with different standards applicable in different states, our local merchant acquirers (banks) are best suited to make any determination about potential illegality.”

They have taken a very soft approach compared to the position they took on a year ago when Electronic Merchant Systems which is the key company that handles payment processing for the medical marijuana industry. Currently the payment processing of MasterCard and Visa has been suspended.
Bankers have said privately that if they had a little firm guidance from the federal regulators they would like to service the legal marijuana businesses but not until the government removes the onus.

The recreational marijuana stores continue to say they cannot get banking services, but dozens have teller and operating credit card machines in their stores which requires a bank account; but it does not have to be a business account.

The co-owner of Denver Kush Club says “he estimates 40 to 45 percent of his stores retail purchases since New Year’s Day were made with credit and debit cards and that several other stores say they are offering plastic as an alternative to cash but they will not give up the name of the bank  they are working with”. The marijuana businesses are showing to have banking relationships but they are not willing to share that information with the public.  They just want to be treated as any other business.