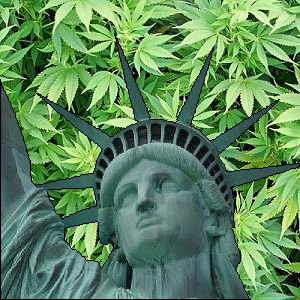 It should come as no surprise that New York is overwhelmingly for the legalization of medical marijuana. Since 1997, the Compassionate Care Act has been floating around waiting to be seriously considered. According to the Compassionate Care NY website’s description of the Act, “The New York proposal was drafted with careful, strict controls: under tight regulation, a patient who has been certified by a healthcare provider to use medical marijuana would register with the New York State Department of Health and receive a patient identification card. Specially approved organizations — such as hospitals or community health centers — would dispense the medical marijuana to registered patients, under DOH supervision.”

Especially with the success the Marijuana industry has experienced in Colorado upon medical marijuana being legalized, New Yorkers are hoping that now is finally the time for the Compassionate Care Act to finally be passed. In an article on HuffPost by Christopher Mathias with State Sen. Diane Savino (D) (sponsor of the measure), Savino “told HuffPost that she “easily” has enough votes to pass the bill now, even if not every one of those senators has publicly announced his or her support.” A confident Savino also revealed that her confidence stems from knowing she has 40 votes to pass the bill, which is ideal considering that the bill only needs 32 yes votes in order for it to be passed.

In an effort to work around the waiting process, Gov. Andrew Cuomo (D) revealed a plan to help those who desperately need the help of medical marijuana as they combat serious, specific illnesses. The governor’s plan involves a limited medical marijuana program which does not require the normal legalization process. In the article on HuffPost by Mathias, he writes that “Under the governor’s plan, medical pot is available at 20 hospitals for people suffering from specific illnesses. Savino has called the plan “unworkable” and expressed serious doubts that the federal government would allow it.” Some patients suffering from illnesses that are in need of such treatment have even considered moving to Colorado now that medical marijuana has been legalized there.

While there is interest in using marijuana for personal use, as seen in the poll revealing a vote of 57-39 percent, it seems that the big push here is for the use of medical marijuana to be passed for the betterment of patients. Many people are upset that the Compassionate Care Act has been sitting on the back burner for so long. In an interview with HuffPost’s Mathias, State Sen. Mark Grisanti (R) stated, “It’s time to put politics aside, and put people first.” For now, New York State will simply have to wait for the legalization of medical marijuana to be passed.